For two decades, the physicians, nurses and staff at CHOC at Mission Hospital (CCMH) have been committed to securing bright, healthy futures for the children and families in South Orange County. In recognition of CCMH’s 20th anniversary, we’re highlighting on choc.org just a few of the many inspiring stories about the staff, and patients and families at CCMH. 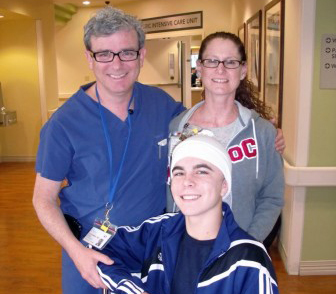 In the story below, we learn how this remarkable patient survived a traumatic brain injury and now shares his experience with other patients and families in the Pediatric Intensive Care Unit, to encourage them and give them hope.

Any parent would be proud of a teenager finishing his sophomore year with an above 3.0 GPA, earning his driver’s permit, and blocking goals on the soccer field.

For Tammy and Steven Ramsey, pride doesn’t quite capture their feelings toward their son Michael and his accomplishments. Roughly six months earlier, the popular 15-year-old suffered a traumatic brain injury. His family was warned that he may never speak or use the right side of his body again.

On the evening of Nov. 19, 2011, Michael was playing with his soccer teammates. While running in the dark, he tragically tripped over a waist-high chain, resulting in a forceful fall on his head. He was rushed to CHOC at Mission Hospital, where he underwent emergency surgery to repair a severe fracture to the left side of his skull and to stop a severe epidural bleed.

Michael remained unstable throughout the remainder of the night, and the next day he was taken back into the operating room for a second surgery to stop two new subdural bleeds. His neurosurgeon temporarily removed the left side of his skull. He was placed in a hypothermic coma in CHOC’s pediatric intensive care unit (PICU).

In the PICU, Michael received round-the-clock care, including monitoring by a team of four nurses for the first 48 hours. As scared as Tammy and Steven were for their son, they noted early on the professionalism and expertise of the staff.

Tammy recalls, “We were in awe of how all of the team members worked together. Whether it was at the beginning of their shifts or at the end, they remained attentive and alert. It was very impressive.”

Equally impressive was the staff’s compassion. Nurses encouraged Tammy to bring in personal items and pictures to decorate Michael’s room. They wanted him to feel “at home” when he came out of his coma.

Eight days later, Michael thrilled everyone when he woke up speaking clearly and using the right side of his body. He underwent physical and speech therapy, inspiring staff, family and friends with his remarkable progress. He went home from the hospital less than a month later. He wore a special helmet to protect his brain until his surgery to reattach his skull.

Michael and his family returned to the hospital looking forward to his continued progress, following what would hopefully be his final neurosurgery. While recovering in the PICU, he complained of a slight headache that quickly turned severe, prompting concerns by his nurse. He was rushed back into the operating room to stop a massive bleed inside his brain. His skull was removed – once again, and he was placed on a ventilator. When he awoke and the ventilator was removed, Michael was unable to speak even his name, as the bleed damaged his brain’s speech center.

The PICU team continued their round-the-clock care, supporting and encouraging Michael and his family.

A week later, Michael had his skull put back on. Shortly after that surgery, he was released from the hospital. He worked extremely hard to regain his speech and return to school.

“Michael is the most disciplined, tenacious teenager I know, so everything he’s accomplished in spite of his injury is really no surprise. In addition to the incredible care he received from his medical team, he was blessed by a great support system of friends who stuck by him throughout his entire ordeal,” says Tammy.

Today, Michael is looking forward to starting his senior year, while playing in college showcase soccer games. Inspired by his physician, he is now determined to become a neurosurgeon. He recently became a hospital volunteer and has made frequent visits to the PICU at CHOC at Mission to share his positive experience with patients and families. He feels it is important to give hope to those who are in similar situations.

He speaks fondly of the team who cared for him.

“Everyone was so kind and nurturing. The nurses are the nicest people I have ever met and were my biggest cheerleaders,” says Michael.