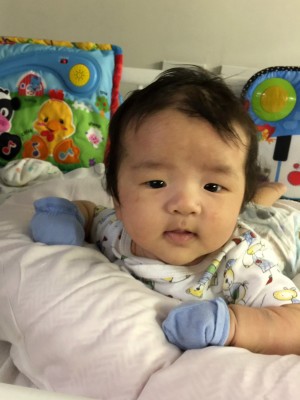 Grace Wu beams as she watches her son Matthew smiling and happy after enjoying his bottle.

“It’s good to see him so happy and active,” she says. “That he could do that makes me very, very happy.”

As a newborn, he was diagnosed with volvulus, a condition wherein the intestine is twisted and can ultimately cut off blood circulation. Symptoms of volvulus include a distended stomach and intolerance to feeding, which Matthew exhibited.

The baby was quickly transferred to CHOC for emergency surgery at just three days old. CHOC surgeon Dr. Saeed-Ur-Rehman Awan repaired the malformation by performing an ileostomy, wherein the intestine is brought outside the body.

Next, Matthew needed time to heal his organs. He spent the next three months recovering in CHOC’s Surgical Neonatal Intensive Care Unit, a special part of the hospital’s main NICU dedicated to the care of babies who need surgery.

There, Matthew was under the care of a multidisciplinary team that included Dr. Irfan Ahmad, a CHOC neonatologist and co-director of the surgical NICU, and many other clinicians.

In the unit, the team cares for patients jointly, discussing the cases of children like Matthew as a group and forming a treatment plan that often calls for the expertise of other specialties at CHOC.

Another key component of the surgical NICU care team is parents and families. In Matthew’s case, his parents and grandfather, Jerry, partnered with clinicians on every stage of the baby’s care.

“Jerry was there every single day holding Matthew – even when he was crying,” Dr. Ahmad says. “He was a great member of the team, and he provided a lot of support.”

As Matthew began eating orally in small volumes as well as through intravenous methods, he geared up for a second surgery that would reattach his intestines. That procedure was performed just three months after the first.

After several more weeks of recovery, Matthew was able to eat fully from a bottle and was on his way home, much to the relief of his family.

“I was very worried because for the first time, I thought I might lose him,” Grace says. “I am very thankful for the care he’s received.”